With much of the most effective work this semester being experiential, and much of the tech we have learned being oriented towards experience as well, our decision to choose the eruption of Vesuvius is not a complicated one: it is an exciting, loud, bright and almost surreal real life event from the past. There were no long conversations had in choosing the topic of our final, we simply arrived at it, almost instantly.

What was more interesting was how we approached turning the broad setting into a more specific and controlled idea. In this instance, we felt that simply letting the audience experience our most valiant effort to recreate the eruption simply wouldn’t be enough, not least of all because, no matter the tech available and our knowledge of its functions, no amount of stagecraft could ever really get near to the power of that eruption, and the terrible fear and dread felt by the poor victims preserved in ash for all those years.

So, we decided we needed a protagonist: someone through whom the audience could witness the disaster vicariously. There was a slight pause in our process at this point, as we thought about how we could bring to life those plaster cast people that have been left to us down the ages, found at the site of the eruption. Perhaps mannequins? Use ourselves standing still? Distribute the audience around the theater?

Our ideas were sidetracked when we discussed Pliny the Elder, one of, if not, the most famous victim of Vesuvius. His fame is due to the fact that Pliny the Younger, his nephew, recorded in letters his uncle’s demise and the view of Vesuvius from Misenum, nearby. The writing about Pliny the Elder was so compelling and comparatively detailed that we began to wonder if there was a why by which we could use him as our lead character, perhaps acted by Sebastian.

In a stroke of luck, Sebastian remembered that he owned a puppet which was specifically designed to look like a Roman man. His white stone-like head looked like a decapitated bust of some ancient figure, and the colour and texture of the skin made it reminiscent of all those plaster cast bodies one can see if one ventures to the Naples museum.

From there, the idea developed quickly: we would tell the story of Pliny the Elder, who died in his journey to save his friend Rectina who was at Herculaneum. The text would be derived from Pliny the Younger’s accounts, and dramatised to work with our setup. We would use video projection, sound design and lighting to evoke the events of Pompeii, but as memories which helped deal with the issue of realism.

One final quirk was the presence of the omniscient voice, a sort of classical god-like voice which helped guide the conversation and direct Pliny’s memories. This device just made sense: it brought in an extra level of interest, and it acted also as a way to make the piece, and particularly Pliny’s descriptions of events, feel less contrived. She interrogates Pliny and forces him to relive his tragic demise from beyond the grave, for the audience’s pleasure.

The process of putting together the piece required reconciling the different elements we wanted to use -- sound, lights, projection -- together and deciding how each element interacted with one another. Since we wanted to create a sensory experience about Pliny and Pompeii, we decided not to use any of the historic images we previously found in the presentation and instead used more abstract images and visual effects to tell the story. We used the following technology and technical tools in the creation and presentation of the piece:

Due to the heavy use of sound in the piece, we used Premiere and Audition to layer the sounds together and place them over the visual imagery. The light cues were written based on and cued off of the video. We initially thought of have the light cues auto-follow each other, but we ultimately called the shows ourselves to have it be more reactive to the puppet movement rather than automated. The lights were not the driving factor of the piece and were designed to enhance the actions happening on stage and heighten senses to immerse the audience into the world of Pliny.

In response to the feedback we got from the class in initial presentations of the piece, we took a more focused approach as we developed the content and plot of the piece. One of the comments we received concerned the perspective of the piece: who is telling the story? We decided to approach it from Pliny the Elder’s point of view as he went towards Mt. Vesuvius and to his eventual death. We also decided to add in time as an element, initially starting from after Pliny’s death to his memories about the moments leading up to his death, and then back to his death. In addition, we created our own dialogue for the script instead of using direct quotations from primary sources, which we did in an initial presentation. The choice to deviate from history and create our own dialogue was motivated by the idea of not creating a historically accurate representation, but a more abstract, sensory, experience. We also started off wanting to use many screens and envelop the audience, but through class discussions about equipment and usage, as well as questions about how we can effectively use so many screens, only one screen ended up in the final performance.

We learned many things throughout the process. We thought a lot about the orientation of the space, as well as the computers needed to put on the presentation. Our initial orientation involved putting the audience in between the lighting console/tech table and the projection screen, which meant that the projector was very far away from the consoles controlling the lights and sound. Flipping the orientation around into the final setup we had for the performance allowed for us to have one centralized place to cue everything. We also learned that it is helpful to have as many elements cued from the same place as possible. Initially, we used Isadora to project the video and QLab to play the sound. However, no matter how hard we tried to synchronize the two, there was a lag between the video and sound, and any lag was very noticeable since the images and sounds were tightly integrated with each other. Thankfully, we were able to get QLab to display video with help of Professor Bengali after encountering much trouble ourselves, which helped eliminate the sound and projection lag.

As an aside, we briefly played around with projecting into the round, white surface in the back of the blackbox, since it really created an immersive world. 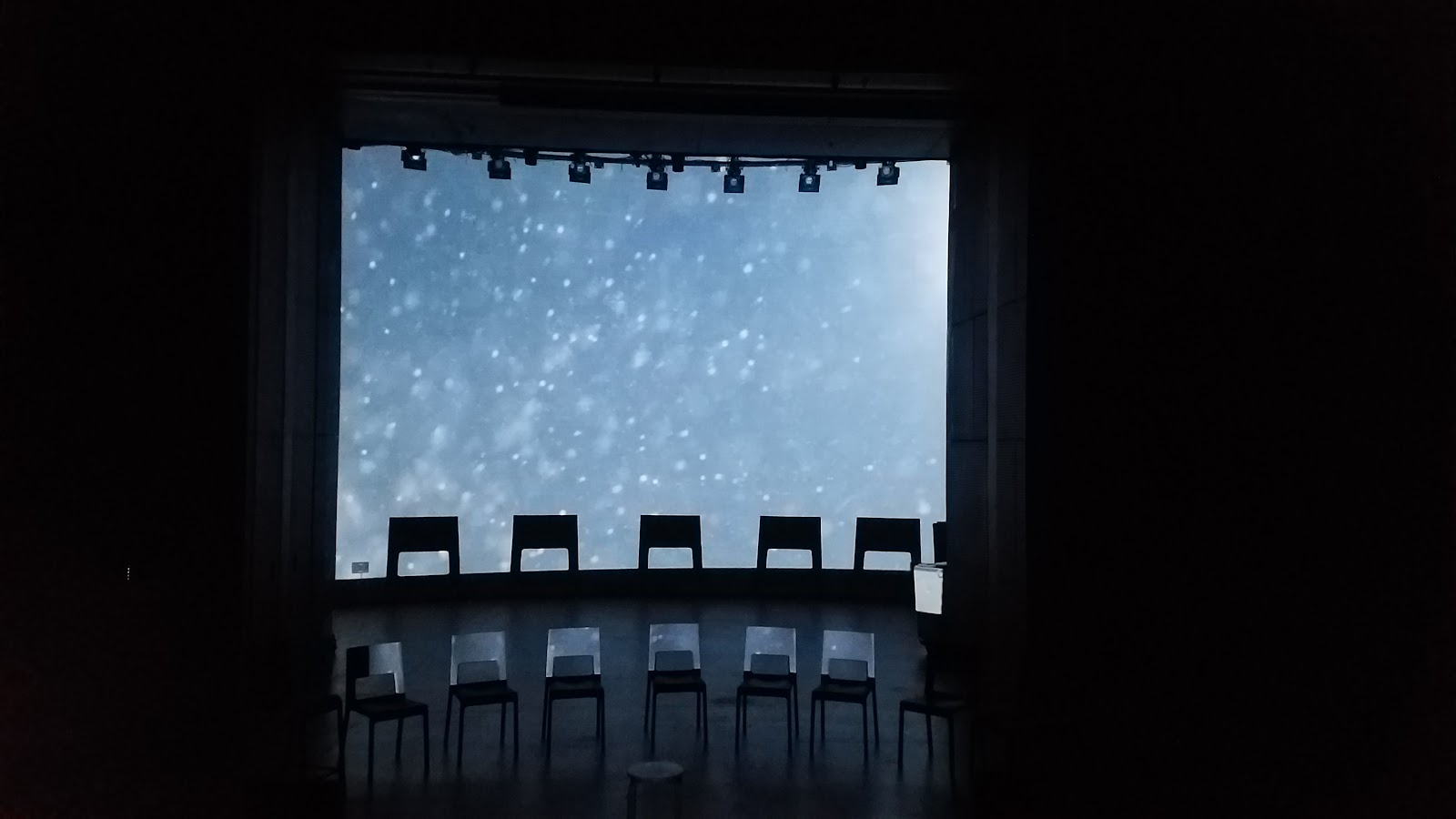 However, we ended up not using this arrangement since we were unable to use the space well enough to enhance the concept of the piece.

Overall, as a group, we were quite pleased with the end result of our project. We came a long way from our original conception of the piece and were able to hone in and focus on the storytelling aspect of the narrative. This project very much forced all three of us to consider every aspect of the performance, from the space, to the lighting, to the sound and to the text. These were all things we had to take into account. All of us have had experiences working in one or so aspects of creating a show, but being in charge of thinking about every detail was a very different experience for us all.

While we did have to consider the individual components of the piece, as a group we could have delegated the roles in a more educational way. One thing we found was that individuals who already had skills in a certain program or area would just take charge and cover such aspect. This meant that we didn’t get to really learn as much as we could have.

In reflecting on this project, one thing that we wished we could have incorporated more was the technological side. Through this experience, we’ve learned how difficult it is to coordinate cues from two different programs. While we considered linking QLab to Isadora via OSC and MIDI control, we thought it too much of a hassle to do so. However, looking back, it may have been worth it to try considering the technical issues we had setting up our performance. It would have also been a good educational experience for us to try something new.

If we were to do this project again, I think we would definitely try to take more risks and try new technologies. However, we are pleased with what we created given the time we had to coordinate everything.