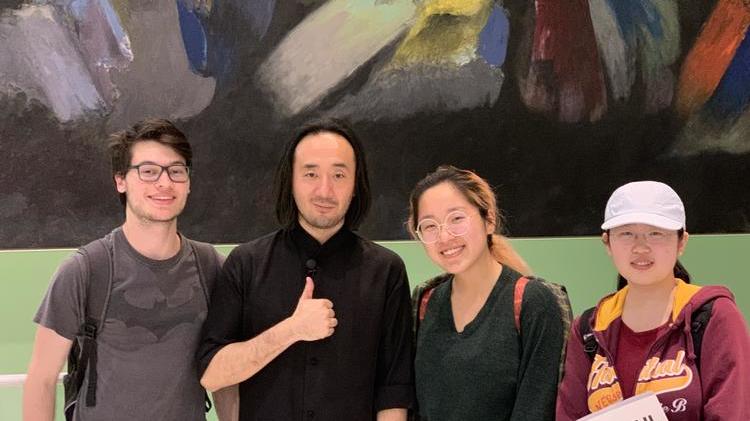 Ge Wang: Artful Design: Technology in Search of the SubLime

Drawing from his new book "Artful Design: Technology inn Search of the Sublime" Ge Wang "*08 captivated students and community members on Thursday, April 18, 2019 as he dissected the designs of everyday tools, musical instruments, toys, and social experiences; examining the ways in which we shape technology and how technology shapes us and our society. 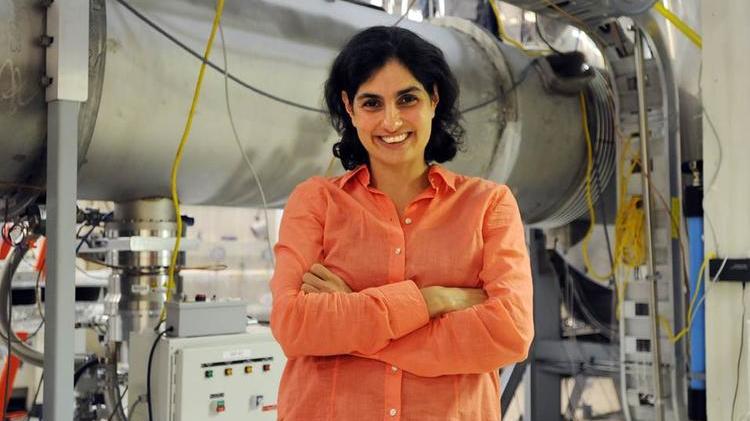 Nergis Mavalvala spoke to a packed house on October 10, 2018, about the historic underpinnings, recent findings, and future goals of the Laser Interferometer Gravitational-Wave Observatory (LIGO) project. 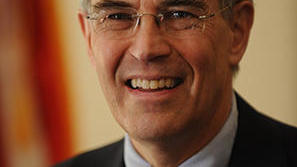 Rush D. Holt: STEM and Policy in Service to Humanity 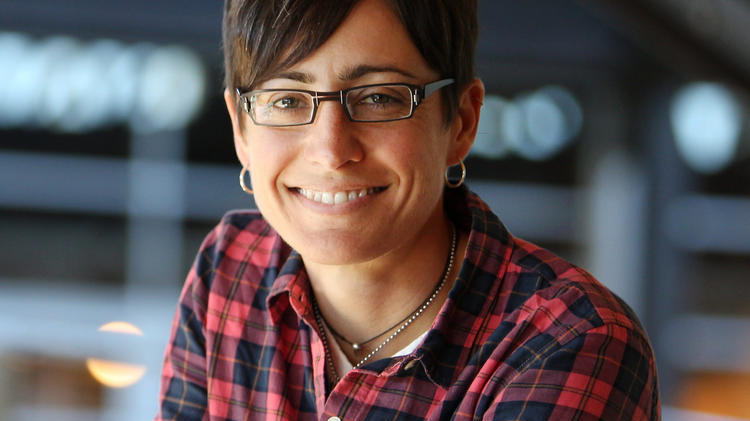 Danielle Feinberg: The Art and Science of Pixar

Danielle Feinberg, Director of Photography for Lighting at Pixar, spoke to a very crowded house about her journey from programming as a young girl to helping to build magical worlds in several Pixar movies.

Norah Zuniga Shaw shared her work as a creative director for interdisciplinary projects and her vision for fostering better futures through collaborations driven by creative motion and choreographic thinking.

NORAH ZUNIGA SHAW is an artist, facilitator and creative director focusing on choreographic ideas as the locus for interdisciplinary and intercultural discovery. She is known for her award-winning digital projects integrating art and science research. Shaw tours her work internationally and since 2004, has been based at The Ohio State University.

Sometimes simple questions have the most surprising answers.

Mary Roach is a New York Times bestselling science writer whose work has explored the limits of the human body. Her most recent book is Grunt: The Curious Science of Humans at War. By combining a humorous approach to her subjects with a probing curiosity, Mary communicates complex ideas and scientific research in a deeply engaging manner.

Robert Krulwich is a Peabody-award winning science journalist at WNYC and the co-host of Radiolab. He has devoted his career to bringing science to a wider audience by demystifying dense ideas, and highlighting the human stories behind the science.

Mary and Robert have a knack for uncovering fascinating stories in places no one thought to look, and asking questions that no one else thought to ask. Their works exemplify a uniquely personal, often humorous approach to communicating science. In this wide-ranging conversation, they'll reveal how they communicate complex ideas with simplicity, make the inaccessible accessible, and uncover the wonder and delight in everyday questions.

Finger and leg dexterity allows us to dynamically stabilize our interactions with objects and the world around us, such as when buttoning a shirt or
landing from a jump. It is critical to chart the development or loss of dexterity in people recovering from a stroke or injury, athletes in training or even in healthy growing children. Quantifying this varied ability so that it can accurately measured has been a challenge, however. The laboratory of Valero-Cuevas has developed the strength-dexterity paradigm to quantify dexterity of the fingers and legs by asking subjects to use low forces to compress a slender and compliant spring prone to buckling. Because the task becomes increasingly unstable as a person compresses the spring, the maximal level of sustained compression quantifies a subject’s ability to dynamically stabilize an object, and thus quantifies their dexterity. Valero-Cuevas will present several clinical and athletic studies indicating the utility of this approach to understanding the integrity of the neuromuscular system in health and disease. Moreover, by quantifying expected changes of dexterity with age, and revealing unexpected sex differences, he will propose avenues for understanding and promoting dexterity in clinical populations and elite athletes.

"How to Get Rich Playing the Lottery*"

For seven years, a group of students from the Massachusetts Institute of Technology exploited a loophole in the Massachusetts Lottery's Cash WinFall to win game after game, eventually pocketing more than $3 million. Ellenberg will reveal how they did it, how they got away with it, and what it all has to do with the mathematical notions of expected value and projective geometry.

*We will not actually help you get rich playing the lottery.

"STEM to STEAM: The Meaning of Innovation"

Co-sponsored by the Lewis Center for the Arts and the School of Engineering and Applied Science.

Leaders think STEM (Science, Technology, Engineering, Math) is the way to innovate. We need to add "Art" to turn "STEM" into "STEAM."

In the current moment of economic uncertainty, every economy is taking stock and once again turning to innovation as the silver bullet that will guide us forward. Yet in the eyes of many leaders, innovation seems tightly coupled with Science, Technology, Engineering, and Math -- the STEM subjects. Maeda posits that we need to add "Art" to turn STEM into STEAM. Through his experiences as president of the US's leading art and design college, Maeda argues that the critical thinking, critical making and creative leadership which is embodied at RISD can lead us to an enlightened form of innovation where art, design, technology, and business meet. He shares lessons from his journey as an artist-technologist-professor turned president to reveal a new model of leadership for the next generation of leaders.

Movies across a broad range, from serious dramas such as “Presumed Innocent” to farcical comedies such “My Cousin Vinny,” along with hit television series such “Crime Scene Investigator” and “Law and Order,” have introduced millions to some version of science in the courtroom. But whereas dramatic versions of judicial proceedings feature suspenseful and even thrilling depictions of last–second discoveries, “ah-hah” moments, and “gotcha” testimony, the real world of intellectual property lawsuits is very different, and offers a distinct view of science in service of the law. There are rarely any surprises…just some very skillful and usually very smart people engaged in highly formalized intellectual combat, with millions and sometimes even billions of dollars at stake. This talk, based on almost fifteen years of service as an “Expert Witness” and some fifty legal proceedings, will take you inside one area of the law that seems to be growing almost without bounds, and which is especially important in a “knowledge economy.”

In the spring of 2010, Steven Strogatz wrote a 15-part series on the elements of math, from basic to baffling, for the New York Times. To his surprise -- and his editor's -- each piece climbed the most emailed list and elicited hundreds of appreciative comments. In this talk Steve described his adventures in bringing math to the masses, and touched on his new book, The Joy of x, as well as his sequel series for the Times this fall.

"Robots as a Social Technology"

As a doctoral student and then postdoctoral fellow at MIT's Artificial Intelligence lab, Breazeal developed Kismet, an anthropomorphic robotic head that has been widely featured in international media and is the subject of her 2002 book Designing Sociable Robots. Professor Cynthia Breazeal now directs the Media Lab's Personal Robots group at MIT, and her research explores expressive social exchange between humans and humanoid robots. She is particularly interested in developing creature-like technologies that exhibit social common-sense and engage people in familiar, human terms. She continues to develop anthropomorphic robots as part of her ongoing work of building artificial systems that learn from and interact with people in an intelligent, life-like, and sociable manner. Nexi, a mobile, dexterous social robot developed by Breazeal's research group, was named one of the 50 Best innovations of 2008 by Time magazine.

Professor Gallian earned media attention in 1991 when he became interested in the methods used by Minnesota and other states for assigning drivers' license numbers. Many states use complicated algorithms or formulas to assign drivers' license numbers but keep the method confidential. Just for the fun of it, Professor Gallian attempted to figure out how the states code their license numbers. In his April 13 lecture, Professor Gallian will discuss how he was able to break the codes for several of the states. The talk illustrates an important problem-solving technique that is not emphasized in mathematics classes. Moreover, it illustrates the fact that sometimes things done just for the sake of curiosity can have applications. Professor Gallian is a nationally recognized mathematician and expositor, known for his humorous and engaging lectures. His lecture on April 13 will be addressed to a lay audience and is open to all.

"Of Neurons, Decisions and Value: Probing the Unconscious Math of the Brain"

"The Dark Side of the Universe "

"Genes from the Fountain of Youth "

Beyond Fear: Response to Bio- and Cyber-Terrorism

"Facing the Growing Threat of Bioterrorism "

"Science in an Age of Terrorism: Freedom and Responsibility"

"Thinking Sensibly about Security in an Uncertain World "

"When Fire Conquers Water: Eruptions of Sumarine and Subglacial Volcanoes"

"Causes and Consequences of the Catastrophic Black Sea Flood"

Science and Technology for the new Millennium

"Planets and the Prospects for Life in the Universe"

"An Artist's View of the Universe"

"The Geometry of Space"

New Vision of Science at Princeton

Professor Shirley M. Tilghman
Howard A. Prior Professor in the Life Sciences
Department of Molecular Biology

"The Revolution in Genetics"

"Dynamic Imaging of the Human Brain: A Window on the Mind"

Science and the Public Interest

"The Vanishing Life of Earth: Do We Really Care?"

"Unpleasant Surprises in the Greenhouse?"

"Toxins, Drugs and You - How Much is Too Much?"

"On Guard and on Orbit: Air and Space Force Capabilities in the Information Age"

"Probing the Universe with the Hubble Space Telescope"

"The Next Fifty Years in Software"

"Scientists, Technologists and the Human Condition: Reflections on some Ethical Dilemmas and Choices"

"The Forensic Sciences and Human Rights: Tracking down Torturers"

"The Cassandra Complex: Who WIll Heed the Warning? Huntington's Disease and Genetics Today"

The Next Big Questions in Science

"The Genetic Origins of Cancer in Humans"

"The Molecular Logic of Smell"

"What Controls the Next Big Volcanic Eruption?"

"Who Ordered This Universe?"

"The Remembrance of Things Past: Genes, Synapses and the Biological Basis of Memory"

A Talk on the Science of Chaos by Professor Albert Libchaber
James S. McDonnell Distinguished University Professor of Physics
followed by
A Dance Concert Inspired by Concepts & Images Found in Chaos Theory
by Geulah Abrahams Danceworks

"Chaos in Science and Choreography"

Modern Views of the Universe

"Is the Universe a Small One?"

"The Search for the Dark Matter, the Unknown 90% of the Universe"

"Where the Galaxies Are"